For an eight week period over the summer of 2013, Kings Cross’ industrial scenescape will be littered with a colourful array of 80’s glow sticks, leg warmers and unabashed disco-pant clad skaters, all in celebration of the suitably named roller-skating phenomenon, SKATE Kings Cross. Alongside the promises of some 8-wheeled disco mayhem, SKATE KX also offers an immersive rink-side American Diner with food bought to you by the pop up dining bastions, Disco Bistro. Grab yourself a gin infused caramel & banana milkshake, and get your skates on the West Handyside Canopy rink!

This enticing concept has already cultivated widespread interest, and will be sure to have you digging out your cobweb-ridden roller-skates from the depths of the attic for a slice of unrivalled disco nostalgia. Appear Here were excited to attend the ‘8 till late’ evening slot for an old-school infused evening of merriment, aided by some of London’s finest DJs and a serving of ‘hard milkshake’ induced roller-chaos.

This experiential pop up was designed by boutique architecture studio Feix & Merlin, whos past projects are celebrated for their uniquely whimsical appeal. The space showcases delightfully kitsch gold chainmail curtains, and a myriad of neon lights that create drama not dissimilar from Appear Here’s pop up favourite, Chris Bracey’s neon light displays. 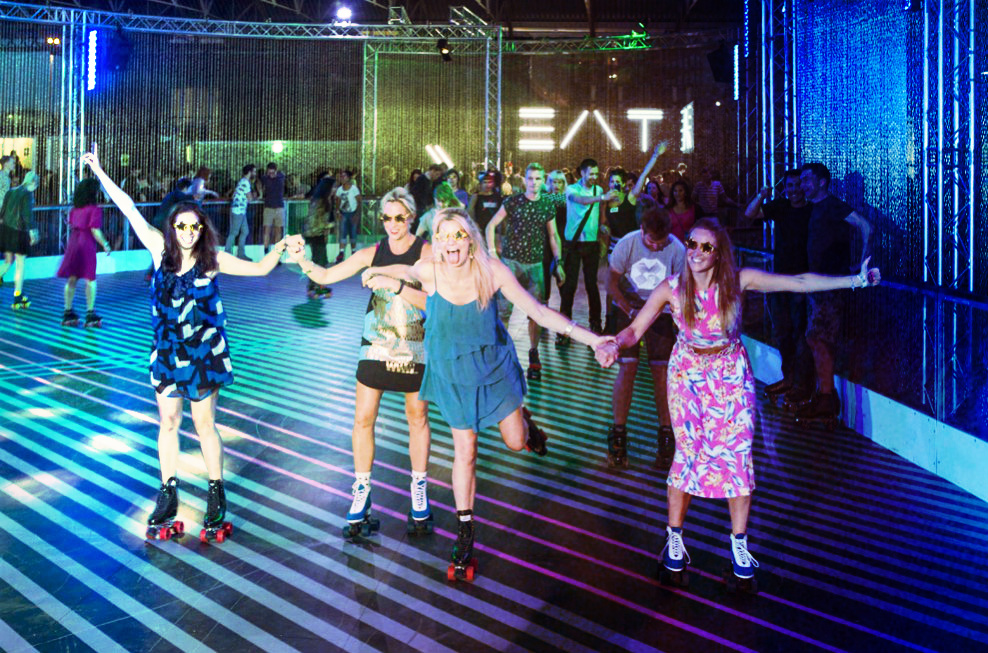 Whilst adhering to Kings Cross’ old-school industrial aesthetic, the skating rink’s creators Feix & Merlin have curated something quite spectacular. The Victorian era warehouse space that SKATE KX currently occupies has witnessed a handsome redevelopment in recent years, and with the aid of pop up fixtures of this calibre, the space has flourished upon its own cultural merit.

With room for up to 100 skaters to showcase their flare for 8-wheeled pandemonium at any one time, the rink is open Tuesday to Sunday, with disco specials held on Friday and Saturday nights. Get your skates on - catch SKATE Kings Cross before this fleeting wonderment disappears on the 6th of September.

Jemina Kiss talks to Ross Bailey about being a digital game changer for the high street.