Doppelgänger Paris on the soundtrack of fashion

Created by twins Brice & Régis Abby, 'Doppelgänger Paris' is an artistic double act. The DJ/producers are based in Paris and have worked with everyone from Armani to Gucci, Kenzo, to Louboutin, and at events such as Cannes film festival and the Rose Ball in Monte-Carlo. Here, Brice and Regis share what they think brands need to do to create the perfect soundtrack, and why music is such an important part of the retail experience.

Tell us a little bit about your background?

We started as visual artists exhibiting in Miami and New York with Spinello Projetcs Gallery for Art Basel. We were invited to play for the White Cube Gallery and Lehmann Maupin, they were organising a dinner for an artist and wanted us to DJ during Art Basel. That was our first main event, but it opened a lot of doors. We then got invited to do an event for Paco Rabanne at Grand Palais, after that it was to Milan for Armani or Jean-Paul Gaultier in Stockholm. Music has always been a natural medium for us. As visual artists, the sound became another medium. It was another way of us expressing ourselves

Do you have a creative process – what does it look like?

We don’t have a specific path we follow, we create a new formula for each brand we work with. It starts by following the journey of the event e.g. is there a dinner first, we’re always thinking about how does the event evolve? We are also inspired by specific elements of the place and moment. Brands will lead us to a bigger picture, which is an important part of the process. It’s not just about your background, they also have things they can give to you too.

Where do you look for inspiration?

We’re really into soundtrack music for the cinema. It’s a great way of creating a scenario or telling a story. We listen to a lot of composers like Cliff Martinez, John Carpenter and Michael Nyman. We also love looking at composers from French Cinema in the 60s. When we were young, we loved watching these films, so we’re more invested in the atmosphere and the music.

What we love about these soundtracks is that a movie scene can be completely different without the music, it’s so important for creating an emotional connection. Music can easily turn the emotion up and down in a second. The music is like another character in the movie, but an invisible one.

We’re always exploring different genres from score music to classical music even operas, inspiration comes from everywhere. All this stuff helps us create our own sound today. The music is not alway our own creation, instead, we create something ambient and organic.

How important is the music as part of the whole brand experience?

It’s so important. For us, the music is not only here to entertain, but it’s part of the total experience. In some ways, it’s even more important than the main product because with the music we create a connection with the customer and the emotive part of their subconscious. They connect together and brands need to be a lot more selective about that. They shouldn’t just see it as entertainment.

How closely do you work with the brands to create the music for their event or store?

It depends on the DNA of every brand. With every client, we try to interact and understand what they’re made of. We have to manage this with our own sensibility and connect the two together. You never make something from nothing; you're always trying to mix the brand’s DNA with your own artistic interpretation. As an artist, you’re always looking to add your touch. Most of the time, when we’re working with brands, they’re looking at us for a specific something to bring to the project. It’s our role to bring that to life for them.

Do you ever walk into a store and get frustrated by the music they’re playing?

Yes. All the time! Right now, there are not so many as more brands are taking care of this part of the experience, especially in Europe. If you think about places like Colette they take great pride in it. But in places like the US and Miami, not so much. Our biggest turn-off is when you hear them trying to be too commercial. You know, global radio music with advertising every two minutes...

If you’re a luxury brand, do you need to be creating bespoke music to reflect this?

Yes definitely. When we talk about music, everyone initially thinks about something with a melody. But it’s more than that. For example, the Music Producer Richie Hawtin create a special soundtrack for Calvin Klein , we are really excited about that kind of project. It wasn’t even about a melody it was more conceptual, organic even. You don’t need to have obvious melodies, it can be much more abstract than that. It’s sound. That’s what interests us. Brands should think of it more as sound, rather than music in the traditional sense.

Which brands do you think nail it?

Gucci really stands out for their music. For Gucci’s events, the music and the atmosphere they create are as important as their products because they create stories. Wherever they are they work with the architecture of space to make the most of it. When you think about the architecture you can put speakers in certain places to create these moments in the music. Sound is organic, so you need to think about how it moves through the space.

Talk us through some of your favourite projects you’ve worked on?

It would have to be the Gatsby Party for opening night at Cannes Film Festival. We designed the music for the dinner for the movie screening. For the opening, we used the original score for the movie and mixed it with swing and ragtime.

Another favourite was the Ball de Rose in Monaco. There had been a dinner before, so we were doing the party after. But the party had to start as quick as possible after the dinner. So the DJ booth was on on wheels and we had to start playing the music backstage before the booth was rolled on the stage – we had to run after it to jump on and play. It was an amazing moment.

Who’s on your wishlist for brands to collaborate with?

Church’s is one brand we’d love to work with. They did a collaboration recently with Vetements, so I think they’d be really cool. We’re big fans of classic shoes. But also we like the idea of putting a twist on the Savile Row history. Some of these brands need to refresh their imagery.

What’s your advice to brands who are looking to create an impact with their music?

Try and collaborate more and don’t be afraid to test more online. Brands could be doing a lot more on their websites, such as working with sound designers to match a sound to the visuals. I love it when you see brands working with artists to create tailored playlists. Look at Armani for example, they curate playlists with other artists and have a radio station and podcasts too. They connect to a younger generation. It’s really impressive what they do – but so simple too. Also, experiment more, especially in your store. Don’t use the same playlist for years and years. You’ve got to keep it fresh and change it up for often. 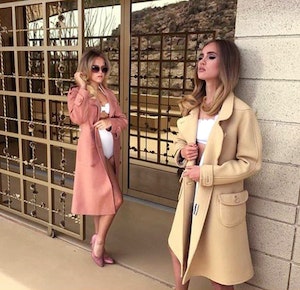 British designers, Pop & Suki, on moving stateside and their love of all things pink. 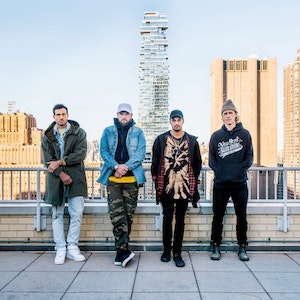 Why New York Sunshine believes the future of retail is immersive

Meet New York Sunshine: the surf-meets-city art and fashion collective that’s got everyone talking about their immersive installations.