Since debuting his first collection at the start of 2016, Daniel W. Fletcher has had a whirlwind year. Protesting against Brexit, winning the BFC Fashion Film Award, and finishing it all off with his own pop-up store, designed by renowned architect Farshid Moussavi. We managed to grab a moment with him to find out how he’s made it happen.

This is your first physical retail space, why did now feel like the right time to open one?

My brand has been going for a year, and we’re now stocked in seven stores internationally, from New York to Tokyo, but we don’t have anything in London. So I wanted somewhere in where people could come to get the full experience of the brand in person. I think people are often quite reluctant to buy online when you’re a new brand, so I think it’s important to have a place where people can see you in person.

We wanted to use the shop to raise brand awareness, especially ahead of our next show in January – and ultimately drive sales. We’ve also used our store as a way to thank our early supporters. Downstairs we have created an exhibition of different publications that have featured us. It’s given us an opportunity to show how the brand has been interpreted in different ways.

Your SS17 collection took the form of an anti-Brexit protest, do you think brands need to play a greater role in politics?

I do think it’s important to be aware of what’s going on around you and to have a point of view. As a young designer. I think you need to engage people in politics and make statements where you can.

Talk us through the inspiration behind the design of your store?

The space was little more than a shell when we saw it. But that worked for us. It gave us the freedom to be as creative as we wanted. The design of the store is an extension of my collection. We created the furniture using the same fabrics and painted stripes across the walls which are mirrored in the clothes.

To come up with the design I collaborated with Farshid Moussaka, who’s responsible for Victoria Beckham’s Dover Street flagship. It’s a store I’ve always looked to for inspiration and is a fantastic immersive space. Working with Farshid has meant I’ve been able to bring that immersive element to this space. I like that when you look through our windows the stripes pull you to the back, so you get the overall idea of being sucked into the store

If you could launch a shop in any building, what would it be?

The Freemasons’ Hall in Covent Garden. I love the idea of taking over something grand like that. My clothes are mainly urban and streetwear, so I like the contrasting elements.

Opening Ceremony stocked you after seeing your first collection. Do you think big brands need to be doing more to nurture young designers?

Definitely. I think big brands have a responsibility to support young designers, and help them get them out there. I’d like to think I’d be doing the same if I was in their position. I’ve been very lucky that I’ve already been supported by some great publications and stores. And while people are in despair at the political environment, I hope brands will look even more to support each other. 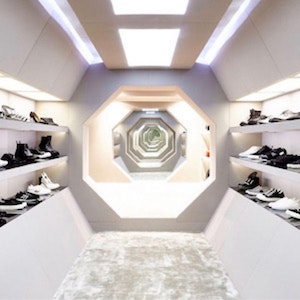 Modern Retail: What can we learn from concept stores 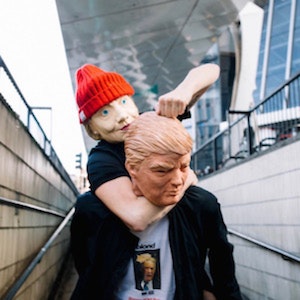 For the countdown to the US Elections, we thought we'd bring a little bit of fun to Old Street Station...