How Ruby was born

DTC bev brand Ruby is shaping up to be a bona fide hitmaker. It’s been written about by The New York Times, cited by Thingtesting for their viral launch, and picked for inclusion in the inaugural Whole Foods Trends Discovery Box. Not too shabby for a fledgling business in its first year. We caught up with ex-Appear Here US marketing manager Barr Balamuth on his latest incarnation at Ruby.

My title at Ruby is Chief of Staff. In practice, to use a start-up cliché, I wear many hats. When I started in January as the first hire, I was focused on sales and distribution. Now my role has shifted to field marketing, event production, and brand strategy. In six months, I'll probably be doing something completely different.

How did that happen?

I reached out to [founder] Noah Wunsch because I was obsessed with the work he had done at Sotheby’s around category innovation as their head of global e-commerce. At the time, I was just looking to learn as much as I could from him.

We sat down for a meeting and ended up talking for two hours, and he told me about his plan to launch a beverage brand called Ruby. He explained his vision of building a new type of “better-for-you” beverage with the hero ingredient being hibiscus, a flower that has been consumed in varying forms across the world for centuries. He hooked me on the idea of building a brand around the idea of curation, that would speak to consumers through different cultural lenses, from fashion to art to music and beyond.

Why is Ruby the best “better-for-you” beverage?

Ruby has the benefits of a premium better-for-you beverage without the sugar content. We're a super-hydrator with antioxidants, vitamin C, with 0 grams of sugar (or calories) in our unsweetened version, and we actually help to curb sugar cravings.

There are so many beverages out there, from coconut water to kombucha, that claim to be better for you by providing some functional benefit, whether it be improving your gut health or boosting your immune system. However, there's an interesting gap in that as much as they provide a functional benefit they are often loaded with sugar. Beverage consumption is one of the largest sources of sugar in the average American’s diet, and sugar consumption is one of the leading causes of obesity.

Tell us about the Rubyverse.

If you follow the Ruby brand, you know our handles are @rubyforfun. That idea of fun is central to everything we do. Our core ingredient, hibiscus, has a ton of health benefits, from being a super-hydrator to having high antioxidant content. However, we want Ruby to be something that consumers can enjoy every day. We don’t want to be a prescriptive product that customers only drink when they're about to exercise or after a night out. Ultimately, we believe that positioning Ruby as a fun, everyday alternative to water will allow us to bring our message of curbing sugar consumption to a wider audience.

We try to have fun with everything we do as a team, and want to make sure it looks like we’re having fun as we’re building the brand (because we are!) but also it’s important to us that people see Ruby and our products as being imbued with a sense of joy.

You’ve got a lot going on in terms of brand aesthetics!

We’re trying to build a brand with a lot of touch points (we call them portals) that people can enter through and which help to facilitate community-building. What that means in practice is we have a lot of ways to access a brand. Whether that’s collaborating with a designer like Sam Massey on hand-painted merch we sell through our Depop or a phenomenal DJ like Jacques Greene on our monthly mix series Mysteries of Matter (M.o.M.) Radio. We want to create a rabbit hole that encourages our community to dive deeper and become obsessed with the Rubyverse. We also work with an amazing illustrator from Berlin named Sharmila Banerjee to help bring this universe to life and place it within a sci-fi inspired narrative.

Ruby hosted a bunch of in-person events this summer, like film screenings and game night. Tell us a bit about the response?

We launched in March during COVID. Summer is not only always the peak time for beverages, but also there was so much pent up energy and excitement. We saw an opportunity to tap into and double down on NYC, which is our home base. (Both Noah and I grew up here, and we saw an emotional and strategic logic to it). With our events, we tried to go beyond traditional bev sponsorships.

Let’s get into sales and distribution. You started at Whole Foods. Can you talk a bit about your retail strategy?

Our first major retail relationship was with Whole Foods, where we launched in March in 51 stores. Our retail strategy at the beginning was really doing everything we could to support their employees, from stocking shelves at 5 am to hosting Ping Pong tournaments for their teams.

Beyond that, we took an approach of placing Ruby in some of the most influential, taste-making retailers in NYC. Places like Orchard Grocer, Alimentari Flaneur, Mel the Bakery, Zabar’s, and the Goods Mart. We wanted to be very purposeful about where people were seeing us for the first time. Now we've thoughtfully expanded to health food stores, local grocers and a few hospitality brands, including The Four Seasons.

How did people react to seeing your brand in person? Any insights gleaned from physical retailers?

Establishing close relationships with our initial retail partners has been enormously helpful in Ruby's early stages. We're able to quickly understand how customers are responding to our product assortment, both from a sales perspective and more holistically through our ongoing conversations. In-store demos have also been an enormous opportunity, as we’re able to see how customers are responding to each of our SKUs, test new flavours, and drive "trial" - the hardest part for a newly launched brand is getting customers to try your product for the first time and demos dramatically lower the barrier to making that happen.

Every brand launches with a perceived target audience. It’s been hugely informative to see how Ruby is resonating not just among younger consumers who are intensely focused on health and wellness, but also a broader group of customers. They all understand that "better-for-you" beverages aren't really better-for-you if they're loaded with sugar.

You really get a true understanding of who your customer is in a way you can’t through e-commerce.

Any thoughts on a Ruby store, and what your dream space would look like?

The details are under wraps, but we are in fact working on a physical activation that will launch by the end of the year. It will bring our ongoing initiatives, such as our For .FUN artist collaboration series and our Intergalactic Rubyverse Library (I.R.L) to life.

My dream space would look something like the now closed space-themed restaurant Mars 2112, where I celebrated many birthdays as a kid. It would have furniture by Gaetano Pesce and art by Sterling Ruby. In one word: otherworldly. 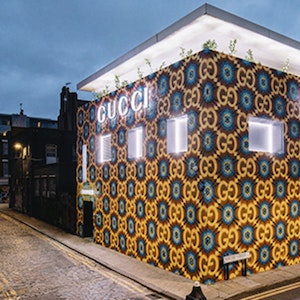 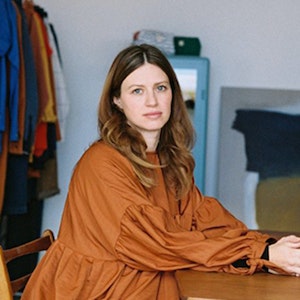 The Five at Five: Louise Markey