There was a time where Gucci selling anything but handbags and dresses was unthinkable. Yet, last year, the luxury fashion brand unveiled its new Gucci Décor collection. It features everything from candles to cushions and dining chairs, and marks a serious play by Gucci into the $649bn homeware and home furnishings market.

Gucci isn’t alone either. Loewe also debuted a home collection last year, acclaimed fashion designer Virgil Abloh is now working with Ikea, and the high-end Moda Operandi has even added a permanent home décor section to its website as the lines between luxury fashion and homeware continue to blur.

Speaking to The Business of Fashion, Moda Operandi’s co-founder Lauren Santo Domingo explained: “When our first move into homeware [a collaboration with Cabana Magazine] was extended three times due to high demand, well, that’s when we really knew. The home section started out as instinctive, but pretty quickly the sales metrics proved us right!”

Working in homeware is also an attractive prospect for typically fashion-focused designers, with both Alessandro Michele and Kanye West admitting the idea of becoming an interior decorator has turned their heads over recent years. So what’s leading to this shift?

Fashion retailers have realised that selling a lifestyle as a whole is a powerful way of forging a deeper connection with their customers. Thanks to the rise of Instagram, our homes are now more on show than ever before, which means somebody who wants to look good in a Gucci dress may be just as interested in their home looking good with some Gucci curtains.

Homeware also tend to be a lot less cyclical than fashion. This means if a brand like Gucci can convince customers to spend big bucks on a chair then they will create a long-term bond, with items such as sofas, candles and cushions unlikely to be bluntly traded in for fashion week’s next hottest looks. In essence, luxury brands have realised there’s a massive opportunity to sell a lifestyle that stretches beyond handbags and shoes, and that they can find a way to play a central role in their customers’ home lives.

More budget, specialist players such as Ikea have long dominated the homeware and furnishings category. Fortunately, this means there’s plenty of space for new luxury players to provide an alternative offer and to ultimately become a disruptive force by shaking up the status quo. And with sales of luxury homeware and furnishings expected to grow by 2.3% between 2017 and 2022, according to Euromonitor, there appears to be plenty of room to maneuver.

The key to persuading customers to spend big on luxury homeware (a Gucci cushion will knock you back around £1000, while a candle is closer to £500) is ensuring the ranges are compelling. Homeware can’t just be looked at as a quick opportunity to make money, but rather a new category to innovate in. Luisa Via Roma is a great example of how to get things right, with its premium e-commerce department regularly partnering with designers such as Matteo Cibi for one-off collections. This means its offer always stays fresh and feels worth spending big on as it has an air of exclusivity.

Although it isn’t a luxury brand, supper club duo Laura Jackson and Alice Levine’s collaboration with Habitat on dinnerware items is also a good example of how carefully choosing influencers to work with on collections can help jump start a homeware range into life. Ikea’s collaboration with Virgil Abloh, meanwhile, feels like an opportunity for the brand to appear less functional and more artistic and premium. Although the collection won’t be out until 2019, Ikea has already given glimpses of what we can expect, from trendy glass cabinets to a chair that has three normal legs and one that is propped up by a doorstop.

“The idea is that it’s a chair with three legs of equal length, but then this one is taking use of this mythical, anonymous design that I think is a metaphor,” said Abloh in a video interview previewing the work. Sure, this might sound a little pretentious, but it shows how the worlds of fashion and homeware colliding can result in genuinely creative work. Abloh was also asked what separates the two very different worlds he operates in. “For me there’s no delineation. I ask myself the same question before I start and that’s Why? Why does this need to exist?” he answered. His answer is telling. Luxury fashion and homeware brands can no longer afford to look at one another as separate entities. Customers want to be sold a lifestyle that intersects with every aspect of their lives. 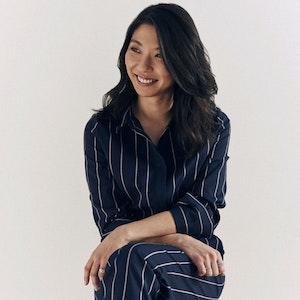 We speak to the mastermind behind the digital-only womenswear brand 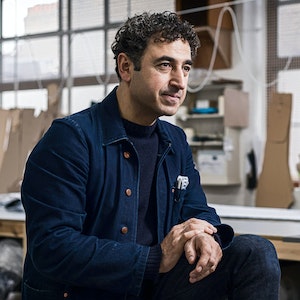 Blackhorse Lane Ateliers on the future of denim

Why this denim factory is building a community-led fashion business