The Art of Making An Idea Happen

We believe that everyone has a great idea inside them. But how do you actually go about making an idea happen? To celebrate the launch of our ‘Space For Ideas’ competition, we partnered with iZettle for our January Underground Session ‘The People Who Do’. We discussed the practicalities of launching a business and the journeys of three people who are defining their respective industries: Sandeep Jerma, Managing Director of Allbirds; Marisa Hordern, Founder of Missoma; and Cheryl Clements, a Performance Coach specialising in supporting founders and entrepreneurs. Hosted by our very own Head of Partnerships, Becky Jones, the session provoked an in-depth look on the highs and lows of turning a great idea into reality. Here are some of the key takeaways:

Just go for it.

Even with an amazing idea, talking yourself out from making the first steps is an incredibly common story heard from would-be entrepreneurs. Having the confidence to run with an idea in the first place is the key to getting started, but also the first hurdle some fall at. Performance Coach Cheryl said it’s a problem facing the CEOs she coaches, recommending: “You need to build a picture of confidence modelled on people you admire. Keep putting yourself in new and difficult situations.” Having belief in your business is needed to make the first steps in your journey, but it’s also crucial to ensuring it enjoys long-term success. As Sandeep succinctly put: “You don’t get rich from an idea, you get rich from just going for it.”

You wouldn’t set up shop without knowing who your supplier will be, so why would you do the same without knowing your target market? Amazingly, the was one of the things that Cheryl said she’d seen a lot of businesses do in their first months: they’d buy a logo, branding, even business cards, without actually knowing who they’re selling to. Understanding your consumer is paramount to any business. “It’s why the Allbirds office is above our flagship London store,” recounts Sandeep, “Our biggest question from customers in the first few weeks after opening was: ‘What are they like in the rain?’ I was straight on the phone to the founder and convinced him to immediately make water-resistant wool shoes.” Doing your research can pay dividends, with Sandeep’s risky order now attributing to 30% of global sales and a very happy British audience.

In a saturated social media landscape, it’s not enough to have an aesthetically pleasing feed anymore. To get noticed, you need to stand out. Opening up a retail space for your brand, if only for a short time, can be the perfect opportunity to show the world what you’re about and meet the people actually buying your product. It’s an unrivalled way to get to know them and tell them the tales behind your brand. As the Founder of a direct to consumer brand, Marisa knew this better than anybody: “Everyone’s talking retail; you do it to tell your story.” Sandeep affirmed this: “A physical space is so important to us. If I were in a start-up, I’d want to do a short term let.” He also stressed the advantages of flexibly renting to test out a new city or market, while also highlighting the hunger the public has for unique retail spaces, stating: “Retail isn’t dead: bad retail is dead.”

The most common misconception about running a business, yet one that still attracts many, is the notion that it offers an incredibly glamorous lifestyle (when, in fact, it’s anything but). It’s an idea that’s emerged alongside the phenomena of the high-growth start-up, but as all our panel agreed, you have to take the highs with the inevitable lows. Attendees were encouraged to embrace this journey by Cheryl: “There’s a risk of failure to everything in life.” Marisa agreed, recounting her first years as founder of Missoma: “There is no glamour to starting a company. I had to harden myself to the fact that some things are out of your control.”

Whether it’s the desire to leave a sustainable legacy in the footwear industry or to democratise luxury jewellery to a broader market, it’s important to know what your brand values and priorities are from the start, and stick to them. Understanding the driving force behind your idea can inform your business plan, your store, even the course of your life. It was what led Sandeep to leave his role as CEO at Liz Earle, to building the sustainable start-up from his London flat. “So much of it is about purpose,” affirmed Sandeep to our attendees, “To go from a 900 person company to a start-up no one’s heard of you need to believe. To do that, you need to know yourself.” 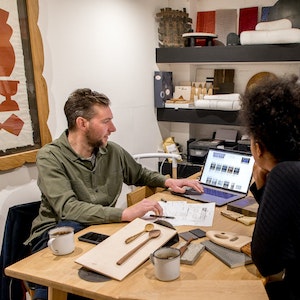 How to win Space for Ideas

Get the inside scoop on how to create a winning idea 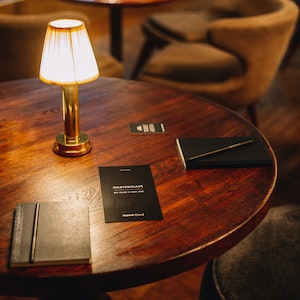 How do you design for a memorable in-store experience?

A masterclass in standing out from the crowd from a renowned creative studio.