Anya Hindmarch on the moments that defined her ideas

MOMENTS is a new global event series running across London, Paris and New York uncovering the moments that have shaped some of the world’s most-loved brands, designers and entrepreneurs. We’ll be looking at how pivotal moments, from a chance encounter to global shifts, have defined their ideas. Our first interviewee is Anya Hindmarch; award-winning fashion designer, CBE holding businesswoman and mother of five children.

From starting the label in her teens, today Anya Hindmarch runs a global fashion empire, which represents a different side to British fashion. Unlike the formality we see in Saville Row, the traditional heritage brands (like Burberry) or Cool Britannia style (like Stella McCartney), Anya Hindmarch represents Britain’s sense of humour coupled with a love of craftsmanship. Here are her defining moments.

You once said: “A handbag is mood altering, it gives you the confidence and power that is far too complex for guys to get involved in.” Tell us about that?

It’s like holding a nice steering wheel in your hands or buying a great new pair of trainers. I’m not a frilly fashion person, I don’t live and die by it. I see it as something to collect, like beautiful art that makes you feel better. It’s confidence boosting; you put on an outfit and suddenly you stand a bit taller and you smile with your eyes. It’s the moment an actor puts the shoes on that they really feel in that role.

Why was this bag important to you?

My mum liked nice things and she had a Gucci bag. I remember thinking how beautiful it was and wondering how it was made. I was allowed to borrow it when I was 16. That was the moment when I realised I was fascinated by this world.

You’re an Essex girl at heart, you grew up in the ‘70s, you went to a convent school and you’re from an entrepreneurial family. Tell me what it was like growing up in that household?

It was a boost. Having a business felt quite natural to me. My father started a business when he was 16 when he lost his dad. Often entrepreneurs have those jolts - they’re used to being uncomfortable. I became well equipped because I remember the graft; when my mum was going into labour with me she was helping my dad with an invoice.

Your dad was once CEO of a company. Has he had a big influence on you?

Yes, he’s my harshest critic and he’s brutally honest. If a family member is your mentor, it’s a vested interest. If I have a problem, he’ll go away and think about it and come back to me with an answer.

You weren’t the most academic. Did you have pressure from your parents?

No, I didn’t, which is lucky. I’m a classic dyslexic as many entrepreneurs are. Stereotypically, they aren’t very academic and are very impatient.

The Moment: Meeting the Emanuels

Tell us who these people are?

The Emanuels designed Princess Diana’s wedding dress and they came in to talk to us at school about fashion. Instantly I knew that’s what I wanted to do. I went back to my desk and drew a handbag shop with my name on.

The Moment: A trip to Florence

What was going through your head when you arrived in Florence?

There was a momentum in the UK at the time with people starting businesses. I knew that I wanted to start a brand and Florence was where I needed to be. Perhaps I should’ve gone to art school but, although I’m creative, I’m really bad at drawing.

And while you were in Florence you found a bag?

I decided to do a language course for two months to learn Italian. I saw Italian girls wearing these drawstring bags and thought they were great. I found a factory, had some samples made and took them back to London with a new logo. Through a friend, the bag was advertised on offer in Harper’s Bazaar and we sold 500 and made £7,000 profit.

It’s amazing you were doing all that at 19.

Being young as an entrepreneur is an advantage because you’re naive and precocious. When you’re older (with a mortgage and kids), you worry more. It’s important to try things and make mistakes.

Talking about obstacles, has being a woman ever held you back in business?

In certain cultures and in certain sectors, like finance, people did talk to my husband more than me but you just push on. Sometimes the pendulum can overswing. I almost don’t want it to be equal but I want it to be fair.

The Moment: Thatcherism in the 80s.

Did that political movement play a big part in your success?

Margaret Thatcher was marmite but she was amazing for me. We went from greyness in Britain to a surge of new businesses. Everyone was being encouraged, whatever their age, to just get going. She started a momentum like we’re experiencing now in the digital age. All the privatisation meant we were buying shares in our lunch hour!

What do you think we need today?

We need to crack on. I want an answer either way but frankly, I don’t care. We’ll work around the problems; we’re a creative country. The worst thing is the indecision.

The Moment: Your first store

So, you’re 24 and you launch your first store in London. Tell us how that felt?

It was a first-floor store in 1993. We exported from very early on but it felt right to have a little store at this moment. For the first time, we met our customers. The direct feedback was incredibly important.

Was there something in particular about the experience that you wanted to create?

We wanted it to be like an atelier where we could meet people. True luxury is about stories, like knowing I found my favourite perfume in Tangier.

Would you still launch that store today?

Yes, but I’d make sure it wasn’t a cookie cutter store. Shopping needs to be social and experiential. The pop-up model is absolutely the way forward

The Moment: Love at first sight

You met your husband at a dinner party. Was it was love at first sight?

Yes, I just knew. I was 25 and he was 12 years older than me, a widower with three children. He’s a nice man who doesn’t take himself too seriously and makes me laugh. We both had our own businesses but we decided to focus on mine, so he joined AH

Working with your husband, how do you manage to get that work/life balance?

There’s none. It’s a risk but it’s fun. Our skills complement each other nicely. I try to treat my husband as respectfully as I would a colleague in a professional environment. But we do make fun of each other a lot.

How do you find the balance?

Wine can work, laughter with friends and a good holiday. If you hit the point where you don’t care if it all burns down, that’s great. Taking five minutes in the morning to breathe really helps too.

The most recognisable face in the world wears your clutch bag. What was that like?

I’ve never chased the ‘celebrity’ (the craftsmen are the geniuses) but royalty, of course, was amazing. Her bag had a ‘D’ on it and now her daughter-in-law wears the same.

She was humble, stylish but shy. She knew the power of her image.

In the age of influencer, do you think it’s gone too far?

Yes, it has. It has to be authentic, otherwise it’s a turnoff. I think the word ‘brand’ should be replaced with the word ‘behaviour.’ It’s about how you act.

The Moment: A sustainable statement piece

You created the ‘I’m not a plastic bag.’ Where did the idea come from?

Someone came to us with the ‘Change the World for a Fiver’ book and they wanted to collaborate. We weren’t even recycling at that point so we used the celebrity formula to raise awareness. I once heard: “If you throw something away, there is no ‘away,” which stuck with me. The bag was £5 and we had a different colour per territory. 80,000 people queued for the launch in the UK. I was not expecting that.

What do you think the fashion industry can do to help climate change?

Loads, it’s a vocal industry. The customer demanding the change will make the biggest difference. If businesses take a little bit of a hit, that’ll affect the supply chain, and it’ll happen quickly. It has to.

The Moment: A car park revelation

What happened in that car park?

I had to decide whether to be Creative Director or CEO (to do both would be a disservice to the business) so I brought in a CEO.

Grown-up. I was excited to have some free time.

What did you find most difficult about being CEO?

The five words: “Can I have a word?” It’s people and retaining talent.

I moved wholeheartedly into the studio because I believe businesses are all about energy, like ripples when dropping a stone into a puddle. We launched shows, which was scary, but I reminded myself the same emotion comes from being excited and scared. We launched a ‘Counter-culture’ collection that celebrated the art of supermarkets (we had a conveyor belt with models dancing on it) and a ‘Diversion’ collection with Margaret Calvet who designed all the road signs in the UK.

Beyond fashion shows, how did you take your collections to a wider audience?

We were in the Royal Festival Hall around the time of the London Bridge terrorist attack. I was looking at the full auditorium thinking “London is incredible.” At this point, the department stores and the press were still the middle men but we wanted to talk directly to the customer. In the fashion shows, you’re presenting something that the customer can’t have for six months. Instead, we did a love letter to the city; around Valentine’s Day we installed giant heart balloons all over London in 29 locations over 5 days.

Why do you think people want to be part of these moments?

I think we all want to put down our phones, connect to real things and feel less siloed. For the ‘Weave Project’ we talked about the art of weaving and created an art installation that people could climb through.

You sat with Dame Natalie Massenet.

We have a shared passion for this terrible book called ‘Creative Visualisation.’ The main message is: if you work out what you want and creatively visualise it, it is much more likely to happen. This was the moment when I realised I wanted to go back to being CEO, and I start tomorrow.

What made that decision?

I felt like I was moving away from the business and I missed being in charge.

Do you think your younger self would be proud of who she’s become?

I hope so. As an entrepreneur - especially as a woman - we have a responsibility to show people we can do it, have fun and be kind.

10 years from now in your future moment

Where are you, who’s there, and what’s happened?

All my family will be there, of course. The business will be totally future proof so it’s watertight for (I hope) many years to come.

This interview was recorded live at Appear Here Moments and has been condensed for the article. 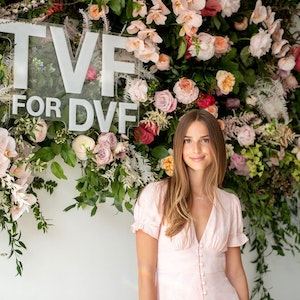 Keeping it in the family: Talita Von Furstenberg launches a clothing line for DVF 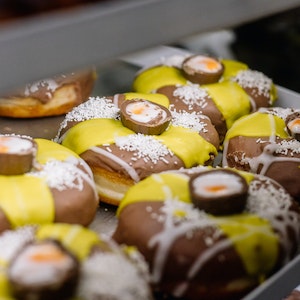