As record sales plummet and streaming services like Spotify and Tidal are the norm, musicians need to find new ways to connect with the young generation. CD racks and in-person vinyl signings do not translate to an audience who prefer selfies over autographs and listen to music via smartphones.

It’s no secret that artists are on the road more than ever before to make up for the decline in traditional forms of revenue (such as record sales). Many even launch fashion labels, work with brands and dip their toes into acting. We’ve noticed another trend that aims to bolster these endeavours: pop-ups.

Temporary stores are being set up to create hype around live dates or a short celeb visit. Why do these work well? The pop-ups create a space where fans can connect to their favourite artists and their community beyond the digital world. Generally speaking, these involve a last-minute announcement and a centrally located venue, resulting in crazy crowds and enormous queues.

Here are some of our favourites:

Fans fled to Soho when Ed Sheeran announced 32 simultaneous pop-ups across the world to launch his latest album ‘No.6 Collaborations Project.’ From Sao Paulo to London, fans queued around the block with 10 stores in the US alone - all open for three hours only.

Similarly, Iggy Azalea used a pop-up to promote her new album, 'In My Defense.’ The space sold merch and shook up excitement for her upcoming show with Drag Race star Silky Ganache. The design reflected the neon look of her new record and was very much an all American affair; styled like a diner with a jukebox and low-riding car in the front window.

The new album ‘Love Yourself’ from K-pop band BTS hit number one in the US and Japan earlier this year. Tying into this hype, when they finally came to London the group opened a pop-store in Shoreditch for a limited time to sell merchandise. Some products were exclusive to the pop-up.

It’s not just the young acts who are getting involved, proven by the recent addition from The Who. The Soho pop-up celebrated the band’s return to Wembley Stadium after 40 years, featuring an exhibition of rare, archive memorabilia and a pinball machine. In-store exclusive tickets to the forthcoming show were also on offer.

For Tinie Tempah, South East London is home, so he chose nearby Shoreditch as the location for his 3-day ‘YOUTH’ pop-up to launch his new album. One of the rooms was decked out like chicken and chips shop Morley’s, along with free food, and an on-site barbershop offered complimentary haircuts.

During Jamie xx’s UK tour, a ‘one week only’ rainbow coloured pop-up called ‘Good Times’ hit Hackney. The shop was installed to promote his new album and stir conversation ahead of his nomination for the Mercury Music Prize. The space hosted NTS radio shows and sold signed merchandise including a selection of vinyls inspired by his favourite local record shop.

Another East London example, here Kanye West fans and followers could get their hands on exclusive new pieces in an Old Street pop-up, launched back in 2016. Special items read ‘LONDON’ in standout graphics as well as several bombers and military jackets available - staples of Kanye’s style.
Old Street, London 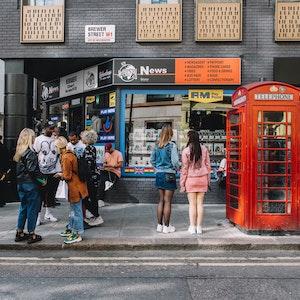 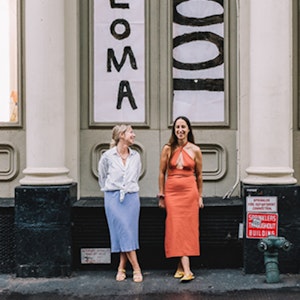 Why Paloma Lanna defies rules & brings her friendships into fashion