This week: COP26 has landed, and if you believe in science – time is running out. How is retail reacting?

The annual UN Climate Change Conference is underway. (Aka the 26th Conference of Parties, for those of you also scratching your heads about the abbreviation).

And the messaging is, well, urgent. “If we don’t get serious about climate change today, it will be too late for our children to do so tomorrow,” said Boris Johnson. “All those promises will be nothing but blah, blah, blah – to coin a phrase”.

• About that blah blah? Eco buzzwords are everywhere. No surprise, when the majority of shoppers say that sustainability considerations influence where they spend. Fuzzy on the difference between circular and regenerative, upcycled vs. repurposed? We’re right there with you. “Some of the greenwashing out there is deliberate, but a lot is unintentional, and comes from incomplete information or flawed calculation methods,” said Kristian Rönn, co-founder and CEO of Normative, a carbon accounting engine that enables businesses to tally up their total climate footprint. “There are a lot of companies that actually want to do good, but they don't have the accounting tools to work out what their carbon emissions are, and they don't have the know-how to reduce those emissions”.

• Green is good. For various DTC brands, those environmental credentials = making that bank. Recycled shoe brand Rothy’s could reportedly be valued at more than $1 billion. Textile-to-textile recycling start-up Evernu has just raised $24 million. “The company is attracting investors, who are increasingly evaluating businesses’ environmental and social impacts as part of their portfolio decisions,” reported Vogue Business.

• Ikea – which just inked a deal to acquire Topshop’s former London flagship for £378m – has aims to become “people and planet positive” by 2030. How? They’ve partnered with COP26, and launched a “Sustainable Living Shops” section in their stores to show shoppers it’s actually affordable. According to their research, 70% of Brits want to live more sustainably, but over 50% are reluctant to do so because of the belief it’s too expensive. (As one of the world’s largest wood consumers, Ikea has been the subject of plenty of greenwashing criticism).

“The systemic cracks in the current retail model, the rise of e-commerce and its consequent environmental impact, alongside consumers’ ethical mindsets… are all driving a need for regenerative retail models,” noted The Future Laboratory.

When the conversation is about sustainability – why does it always come back to fashion?

Because what’s more universally understandable than the clothes on our backs, and the resources it takes to make them?

• Fashion is also on the official agenda at COP26, with the industry’s emissions accounting for up to 10% of the global total. “The vast majority of fashion’s supply chain still relies on conventional agriculture and environmentally damaging manufacturing processes, and the industry is still getting to grips with how to fully understand and address its impact,” wrote Rachel Deeley in The Business of Fashion.

• Parisian department store Galeries Lafayette’s shop-in-shop Le(Re)Store only sells circular fashion – meaning items designed with a consideration of their entire life cycle: removing polluting materials, reusing where possible, and returning waste responsibly to the earth. Circular, or closed-loop production, can be built into business models through offering repair services – take Nudie Jeans, which has repair shops around the world. There’s even completely compostable clothing. “Plant your Pants” is the campaign name for intimates label Kent, which encourages people to compost their undies when they’ve, uh, worn them out. Billi London makes biodegradable stockings, and just opened their first shop. “The physical space at Seven Dials helps with [connecting with customers] and we are seeing more and more people moving away from retailers like Amazon and sourcing more sustainable options or supporting independent brands,” said co-founder Sophie Billie-Hardwick.

• Löfte, a platform for sustainable luxury brands, aims to be a destination where “you never have to choose between style and ethics”. (They also just launched their first pop-up with Appear Here in East London). Founder Daisy Harvey started her business after a personal epiphany while working as a merchandiser for a large company – she wanted one go-to place to shop stylish, sustainable fashion. She also publishes blog posts around what terms like recyclable actually mean. “I don’t want the brand to be preachy, and make people feel bad about what they’re buying. I want to help inform people, to make the facts available for people if they’re interested,” said Daisy.

And interested, they are. 80% of people rate the importance of considering sustainability while shopping.

“If we do it correctly, within 10 years we won’t even talk about sustainability,” said Global Sustainability Manager at Avery Dennison. “We won’t call it sustainability. It’s just the way business is done”. 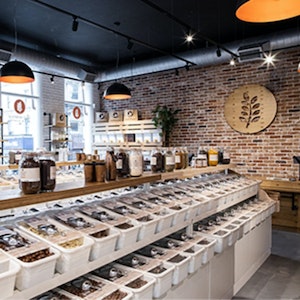 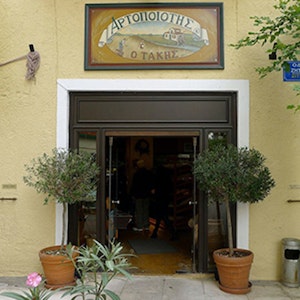 Neighbourhood guides: Live like a local in Koukaki, Athens

Art and architecture thrive in this neighbourhood. Here are the spots we recommend.