New Zealand native, Amy Woodside moved to New York over 7 years ago with no job, no five-year plan but some big ideas on how to make it in New York City. After spending a few years doing (in her words) “a lot of average writing” Amy began chatting to her friends about their lives in order to figure out hers. What she realised was how valuable a community of inspiring, like-minded women could be to each other. So she decided to create her own.

OKREAL is a growing network of inspirational women who share their journeys, stories and advice for others to learn from. Her beautifully curated site is a digital community for young and ambitious females. In the real world, OKREAL hosts “results-driven experiences” for women, like Amy, who are at a crossroads figuring out their lives: helping them determine what fulfilment looks like and how to get there. With interviews with some of New York’s brightest female entrepreneurs, Amy has a wealth of knowledge on what it takes to make it this city. Here she shares a few gems of advice.

Tell us about your background, and how OKREAL got started?

In the years leading up to OKREAL I split my time as a freelance project manager in the branding world and as an artist. I loved the work I did and was fortunate enough to work predominantly on art commissions, but I wanted something more. I wanted to build something of my own, and thought for a long time about what I was good at, what I enjoyed doing, and what I thought was missing. I found it interesting that no-one was asking women role models the kind of questions I wanted answers to—I wanted to learn about what fulfillment meant to them and the reality of achieving it for themselves. That’s how the website started.

Events were a natural next step. I started doing live interviews, which led to mentor circles, which led to one on one coaching. I think it’s important for women to look at the lives of people they admire and know what it took to get there—that it doesn’t just happen. I think there’s a lot of value in learning from others to see yourself more clearly.

Being from New Zealand and living a bit in Toronto, what drew you to New York?

I was always drawn to the diversity, ambition and energy of NYC—and the romance of it too, coming from a tiny island on the other side of the world at 22 years old. I went to Toronto as a kind of midway point, then arrived in NY in 2009 and never left.

What’s the big mission – where do you want to see OKREAL in 5 years time?

I think the root of who we are will remain the same: women’s wisdom for a life of fulfillment. The live interviews, mentor circles and coaching will scale—we’ll be reaching more women all over the world, and making it easier for women to access all things OKREAL.

Why is having a strong community so important for female entrepreneurs?

We all know that women face gender specific obstacles in their careers—and while you need people who you can relate to in tough times, it's more than just a bond over mutual challenges. There is something really joyful, nurturing and awesome about being supported by other women when you're building something. I mean, is there anything more empowering than an army of women ready to lift you up, fight on your behalf, and push you forward? (I’ve also just realized I’ve read this question as ‘a community of women’ instead of just ‘community’—so there you go)

You’ve spoken with so many inspirational and strong women, is there one interview in mind that really stood out to you?

All of them teach me something new—but a few of my favourite quotes from OKREAL interviews:

“There is no door that just opens for you. You have to build the door.” — Jaclyn Johnson, CEO, Create & Cultivate

“If you don’t like the process, the outcome is not going to be any better.” — Bonnie Wright, Director

What are your tips for small brands looking to build their communities in new cities?

Start with the people you already know, who have the same values. My first OKREAL interviews were with women who I'd worked with previously. Our website was built by friends who were in the design world. Listen to the people around you. What do they need and how can your unique skill set provide them that? Don’t be discouraged by starting small.

What advice would you give to someone looking to start their own business here?

Everything you need to build a business—money, patience, courage, resilience, humility, sacrifice—make a guess of how much you'll need, then triple it.

What are the most important lessons you’ve learned from running your own business?

That you should take your work seriously without taking yourself (too) seriously. That there is always more to do and that you need to find peace with not doing it all. That if you don’t accept sacrifice as part of it you won’t get far. That people are always going through something you don’t know about. That a good accountant is necessary. That comparison is a waste of time. That humor solves a lot.

New York’s best-kept secret for a quiet place to write or work?

The Wing is my new favourite place, although I’m not sure how secret that is… Happy Bones (our family cafe) early on a Sunday morning when you can get a table is pretty great.

If you were to create a physical shop or experience for OKREAL what would it look like and where would it be?

Some magnificent palace fit for a queen overlooking the sea with rooms to work, play and chill in. 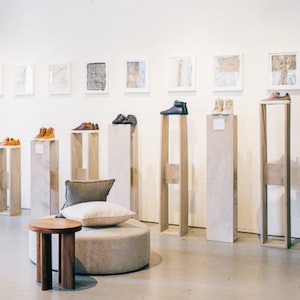 Find out how the founders of KOIO Collective are disrupting the luxury sneaker market. 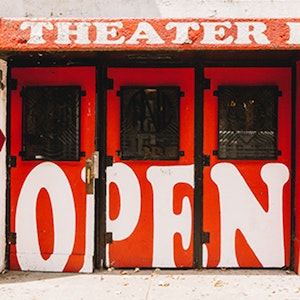