The rise of the mural

There was a time in the 1980s and 1990s where murals were most associated with graffiti and hip-hop culture. Depending on your perspective, this controversial artwork was either a powerful social statement giving a voice to the disenfranchised youth, or a social nuisance which ruined previously clean buildings.

Fast-forward to 2018 and murals are now a popular form of modern marketing, with major brands seeing real value in hiring an artist to paint the side of a building. If you go to Shoreditch’s Village Underground, there’s an ever-changing mural inhabited by everyone from KFC to the video game Call of Duty. Meanwhile, New York’s Williamsburg is plastered with branded murals.

Geoff Gray, chief operating officer at High Rise Murals which has clients including Google, Facebook and Nike, says the business has tripled in revenue over the last five years as more and more brands look to murals as an alternate way of speaking to consumers. Appear Here caught up with Gray to find out why brands are falling in love with the mural and to ask what the benefits are of this more artistic form of advertising.

Is the popularity of Banksy and street art driving the trend of brands taking up murals, or is it something else entirely?

There’s definitely an element of that. Back when pioneering brands like Adidas first started doing murals in New York, it was seen more as graffiti and a way to connect with the urban market, but it’s moved way beyond that now. Street art has grown and is now recognised more as an art form, and this means outside spaces are looked at as canvases. The overall acceptance of murals has grown massively among brands. They realise this is a unique way of talking to consumers, which can’t easily be replicated by their rivals like, say, digital media spend can be.

What are the main benefits of painting a mural in Shoreditch, then?

The key to successful marketing in 2018 is to do something that can’t be easily replicated. Digital advertising can be samey, but a mural is unique. Every time we do a mural for a brand, hundreds of people stop in the street and take photos, which they then share on Instagram. It gets the public to stop looking at their phone and to look up, and not many forms of marketing can create that kind of response. This is clear advertising that can’t be faked. People like to look at it being made so to be associated with something so artistic lends an authenticity to a brand.

What makes a successful mural campaign? What are some of your favourite pieces?

We did one for Johnny Walker, a photo reel shot of the bottle and a glass with whiskey and ice in it. It was on a wall that was 60 to 70 foot high. It looked like a photo. The impact was that people did a double take when they saw it, as naturally the response is ‘wow’ when they realise it’s hand painted rather than vinyl. Back when I was on the client side and working with Umbro, we found where all the team members of the England football team grew up and painted their shirt numbers in their hometowns. That was effective and a real personal way of doing it. A brand in Hong Kong fitted converters onto cars to take the carbon out and turn it into black paint. They then used this paint to make murals. This meant every artwork they did was sustainable and reduced pollution.

It sounds like brand and artist collaborations are the new norm…

Definitely. We’re increasingly seeing brands work with artists in order to take their marketing to the next level and evolve it to create specific art pieces. We did one for Michelin on Portobello Road, just the Michelin man. They chose the artist. The locals liked it, as it was a bit of work that was specific to them. I believe brands are getting closer to sponsoring artists. A lot of the time murals are one-off statement pieces in Shoreditch, as it has the highest concentration of young people, but this shows a lack of imagination from media planners. I would say brands should look beyond London, as there’s so many cities ripe for murals; places where you could make more of an impact as there would be much more of a surprise factor. We’re only just scratching the surface with the kind of brand storytelling you can achieve with a mural. The art of collaborating

Five ways brands can turn creative collaborations into a success 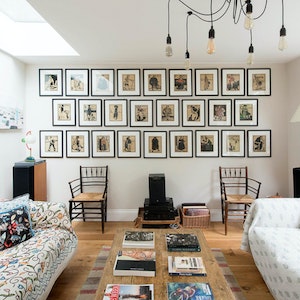 What retailers can learn from art curators

The presence of artwork within stores is increasing and we find out why.