The Alternative Showroom: How to make Fashion Week work for you.

Typically, a showroom during Fashion Week meant a single clothes rail in a crowded PR office, competing for the attention of the industry’s buyers with, on average, fifteen other brands. But in more recent years, young brands have turned their back on this route. In a digital age where you can reach a buyer via social media in a second, the showroom is perceived as irrelevant and labels are beginning to question the norm. Is it worth the money? Am I being represented in the way I deserve? What am I actually getting out of this? How can a new label possibly stand out in one of the busiest weeks in the fashion calendar?

Enter a new wave of brands who have decided to take matters into their own hands, redefining the showroom by moving into their own stores; creating a new kind of experience for buyers and shoppers alike.

Read on to learn the key benefits they’ve experienced from setting up shop for fashion week:

Build real connections with your customers.

The secret behind the success of a showroom is the importance it places on face-to-face interaction with buyers; creating relationships that can’t be replicated on social media. A central showroom amongst the buzz of Fashion Week can be the perfect setting to build these meaningful connections you might not have otherwise met in a typical invite-only showroom.

Real-life interaction has never been more crucial in our digital age, and no one knows this better than independent womenswear label KITRI; whose responsive business model places the consumer front and centre of their development. So, founder Haeni Kim found that her immersive Marylebone space in the heart of Fashion Week became crucial to connecting with the public during Fashion Week, going out into the streets to hand out zines and welcoming Fashion Week shoppers into the store: “I always wanted a physical touchpoint with the customer to best understand her needs. I looked forward to meeting more customers and understanding them better.”

Do Fashion Week your way.

Moving your showroom from a corner in an office to the streets during Fashion Week is an opportunity to get creative. Fit-out, design, even your playlist can all be tailored to you. Because you don’t share the space with any other brands, there’s no need to compromise. In their central Soho space for LFWM20, streetwear brand EJDER had the freedom to curate a completely unique experience; one that gained press attention from HYPEBEAST and thousands of passers-by. Using their founder’s background in youth work, they put on an immersive youth culture event series in their shop including DJ sets, a photography exhibition and even workshops.

Simon Suphangdali, founder of EJDER tells us that this kind of alternative is perfect for the biggest event on the industry’s calendar. “Fashion Week is inherently about destroying the old and actualising the new”, their founder told us, “In nature, it lacked all the necessities of a showroom designed to fit the needs and wants of the buyer. However, it did something far more important than those needs and wants: it displayed the brand's ability to physically manifest its culture and community.”

Stand out by doing something unexpected.

Last season, there were over 240 shows over the course of the four Fashion Weeks, in a month that showcased countless brands; in such a crowded market, it’s more important than ever to stand out. Even the biggest names in the fashion industry are using alternative spaces as a tool to do just that. To celebrate the opening of their new five-story London flagship and the launch of their Fall collection, MATCHESFASHION.COM curated a presentation in a New York showroom space. The central Mercer Street location featured 40 models incorporated into five different scenes, each representing a different floor of the London townhouse. Having only previously utilised the traditional showroom for their collection launches, the spectacle was an unexpected move from the well-known brand, but their creative risk paid dividends; receiving significant attention from the reporters and the editors in attendance. Their CEO, Ulric Jerome noted at the time: “Nobody has ever done this before as a retailer. Bringing this live to an audience is exactly what we try to do every day.”

Turn your showroom into your very own store.

One of the more obvious benefits of having a showroom on your city’s streets is the new opportunity to make direct sales with like-minded consumers; doubling up your showroom as a retail experience in its own right. This is particularly important if you’re considering investing in physical retail in the future: what better time to test the waters than Fashion Week? By setting up shop in their Soho space, EJDER was able to connect with an unprecedented amount of customers during one of the most crucial times of the year for the brand: “The space allowed for a commercial return, but it lacked the spectacle of the fashion show. However, we made up for this via more concentrated installation designs and thorough activations. It allowed for the promotion of our brand in a highly competitive time.”

It’s more cost-effective than any catwalk.

Before, a womenswear brand like Finery London would have had to pay a premium to make an impact on Fashion Week, but by strategically showcasing their first collection in the central Seven Dials, they were able to share the attention of one of London’s busiest luxury fashion destinations. The interactive window display allowed Fashion Week attendees to ‘win’ access to the launch of their online store; an inventive move that brought Finery London straight under the noses of the fashion industry insiders. By trusting their creative vision and deciding to do things differently, Finery London experienced thousands of sign-ups pre-launch and a 50% conversion rate after the site went live; all for the fraction of the cost of a traditional runway show. 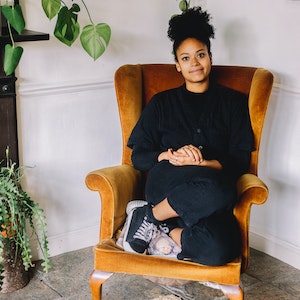 We catch up with last year’s Space for Ideas winner, Sophie Sellu. 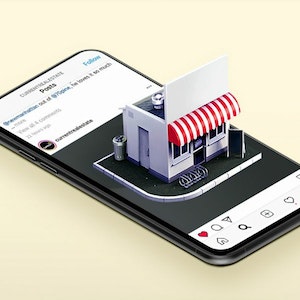