When Liam Hodges entered Space for Ideas last year, his label had already graced the runways of Fashion Week and cemented itself as one of the most promising young brands Britain had to offer. Founded in 2013, his eponymous label was built as a celebration of misfit subculture; debuting for Fashion East just a year after graduating from the Royal College of Art. But despite achieving a level of industry notoriety that counted Drake, A$AP Rocky and Lily Allen among famous fans; his label still only traded online. Tired with holding sample sales at the back of London pubs, Liam put pen to paper and submitted to Space for Ideas for the chance to create a store on his terms.

He was named the Appear Here Team Choice Winner from over 3000 entries and opened his first bricks and mortar store in the heart of Soho. Using props and fragments from old photoshoots and past seasons, Liam created a space to showcase his latest collection and bring together his friends and fans. The downstairs event space played host to artists, events and DJ sets till midnight in a space that celebrated the creative community bound together by Liam’s values of individuality and authenticity. One year on from winning Space for Ideas, we sat down with Liam at his Silvertown studio to discover how his first physical space helped him elevate his brand and reposition it for the future.

When you entered Space for Ideas, Liam Hodges was already a fully-fledged label in its own right; why did you feel drawn to enter the competition?

It all kind of stemmed from a frustration with how I was working with physical space at the time; I had a problem with doing continuous sample sales. That was pretty much all we’d done in terms of a physical presence up until that point but I was so frustrated with them because you’re selling everything off in the back of a pub in London, you’re cheapening the brand to one of your biggest markets.

We still had all this stock from previous collections but I knew that I didn’t want to do a sample sale again. So I was like: let’s see what happens if we enter Space for Ideas! For us it means the chance to not just get a free shop; it was the opportunity to elevate our brand and give it a new dimension.

Was the chance to win a free fully-tailored store important to your development business?

Well, the majority of our business was wholesale at the time or we were selling through our web store, so we were really keen to go Direct to Consumer through a store. We wanted to get feedback on our physical space and test out some of our more artisanal upcycling ideas. Throwing ideas around the studio is one thing, but then seeing what people want from those items is completely different. It led to a change of brand values.

In terms of the design and fit-out, how did you bring your Physical Realities concept to life with the Appear Here team?

At the studio, we were going through the process of redesigning the logo, so we were very much in the headspace of rethinking what the brand was and what we wanted it to be. It was the perfect time to pull it all together. We were taking all of these ideas from the internet and online and putting them in reality, hence the name. We were taking old collections, different props from past photoshoots and putting them all in a new Physical Reality space; it was really well-curated.

Business model aside, how did having your physical space let you express yourself creatively?

Well, giving the Liam Hodges brand a new dimension was very much a part of our space from the start. We knew we were doing a shop but we wanted it to be more, you know? Because there’s a big basement in the shop we had a party, DJs till midnight, a panel talk with Leanne Elliott Young, and the artist Alfie Kungu came in to do some in-house painting as well. Some of those paintings led to the graphics that became SS20, so it kind of became an open-plan workspace too.

What was the most challenging part of realising a physical space for the first time?

It was a really good project to be a part of, but it was one of those ones where we didn’t realise how big the learning curve would be! In terms of work, it was huge but it was so much fun. Having the store ended up getting us such good press and really gave us the opportunity to meet the customer to see what they liked and what they didn’t; which you can’t really replicate.

Did getting feedback from customers influence any future collections?

When we had the Physical Realities space, we’d more or less finished SS20, but funnily enough it influenced AW20 that we just showed in Milan, which featured a lot of pieces we’d made and upcycled for the pop-up. Now, the upcycling of old collections is a huge part of my brand; 30% of my collection was made in this way and that wouldn’t have been possible without the shop, which I thought was really interesting.

You just mentioned that Space for Ideas led to a complete change in brand values, what do you mean by this?

After the huge rush of SS20 and doing the shop, we completely regathered ourselves as a label and really sat down to take all our learnings and redefine the brand. For us, it meant slowing down and going back to the process; looking inwards at our designs, making and how we managed our waste. After doing that, it felt like we’d pushed through a wall and made a new path forward for the brand. It felt like we’d pushed a reset button, and a lot of that came from having the shop.

Would you venture back into bricks and mortar again?

Oh, I would like to do a shop again for sure. What we’re looking at right now are a few plans on how we can change to be more Direct to Consumer, but you’ll have to watch this space…

Finally, if there’s one piece of advice you’d give to someone who wants to enter Space for Ideas, but doesn’t know how to get started, what would you say?

Make sure you know what you want to get out of it because that’ll focus your vision, but also make sure that it’s an idea you're genuinely interested in and that you're ready to explore. Make sure you’re not just doing it for the sake of it: it’s called ‘Space for Ideas’, not ‘Space for printing cash!’ 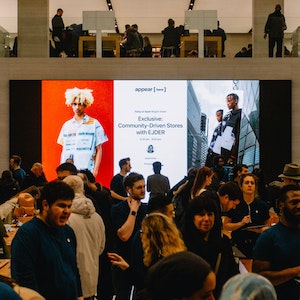 Building a community with EJDER.

The founder of the rising streetwear label shares how to build authentic communities around your brand. 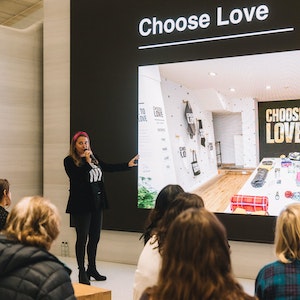 The CEO of Help Refugees on how to use retail for positive change.

Takeaways from our first event in partnership with Apple.