Cultivating food for our future

When we look toward the future, we can envision a world dominated by hundreds of powerful mega cities. Those metropolitan hubs will need colossally more resources: it’s estimated that in the next 15 years, the world will need 50 percent more energy, 40 percent more clean water and 35 percent more food. Yet, the planet is already dealing with seismic natural resource depletion and climate change, due very much in part to our global food systems. And if that’s not alarming enough, one third of the food we produce everyday goes to waste due to spoilage and overproduction.

“Humans have without a doubt created an astounding food production system. We’re more food secure than ever,” we’re told by Simon Caspersen of SPACE10, a Copenhagen-based future-living lab on a mission to design better and more sustainable ways of living. “We’re able to supply the masses with inexpensive food everyday through mass production, storage and transport across oceans and continents. But cheap food comes at a major cost for both people and planet.”

When it comes to understanding how our society’s consumption patterns are detrimentally affecting our planet, in parallel to rising populations and rapid urbanisation, too many people still know too little about it. But could we be on the cusp of a green revolution?

Going vegan may seem like the latest trend everyone loves to talk about, but there’s a sense of shifting mindsets wafting through the air of metropolitan hubs around the world. People are waking up and coming together to ask big, important questions. Such as, how can we grow nutritious food locally and make it both accessible and affordable for many people? How can we reduce food mileage and our environmental impact? How can we better educate children about the importance of nutritious food? What new types of food production and distribution can technology help us pioneer?

Urban farms have sprung up on rooftops across cities, many of which can be found in New York City. Places like Brooklyn’s Eagle Street Rooftop Farm and Gotham Greens provide local and fresh produce to neighbourhood markets, as well as building community through offering education and volunteering opportunities. Restaurants and food businesses are spearheading sustainability through locally sourcing their produce, or growing it themselves. Farmers having to contend with the effects of climate change on their yields are beginning to use new techniques that allow them to produce food more efficiently than in fields. Through hydroponic systems, LED lights and computerised automation, microgreens can be grown up to three times faster using 90 percent less water.

Vertical farming, a way of cultivating fruits and vegetables inside of tall buildings using LED lighting, has taken off– particularly in Japan. In New Jersey, AeroFarms introduced itself as the world’s largest vertical farm, producing two million pounds of leafy greens a year without the need for soil, sunlight or water. Designers and architects are also rethinking urban agriculture, such as Mitchell Joachim’s urban farm pod that has a food growing system on the outside and habitable space on the inside.

“Urban farming is already booming. People grow food in their apartments, on rooftops and in community gardens. Imagine If we diversified our production methods so people could not only be consumers but also producers, in keeping with the rise of the circular economy,” says Simon.

With The Farm, an initiative launched by SPACE10, they explore solutions for our broken food systems through prototyping alternative methods for growing, distributing and integrating food production in our cities. SPACE10’s LOKAL, a prototype salad bar that grows microgreens locally and vertically using a hydroponic farming system, aims to provide a space conscious and sustainable way for people to grow their own food. It was on display during London’s Design Festival, serving salads to Londoners to test how they felt about their food being grown hydroponically.

Initiatives such as SPACE10 aren’t just exploring how to produce food closer to consumption– and therefore decrease food mileage and waste– but also how this ties in with our broken nutrition system.

“Take a normal apple as an example. It takes an average of 6 to 11 months to get from farm to grocery store in the US. When an apple ends up in your hands, it’s already lost 90 percent of its nutrients and antioxidants,” says Simon. “Besides growing things locally, I also believe that we need to combine it with alternative sources for protein. Algaes, insects and lab grown meat will become a much bigger part of our diet in the future.”

Evidently, the way the world is used to doing things needs to change. We as a human race need to be more open-minded, more efficient and more regenerative when it comes to our consumption habits. Out of necessity and urgency, it’s these entrepreneurs, farmers, scientists, designers and communities coming together to find solutions to our food systems that are the vanguards of a sustainable future for us all. 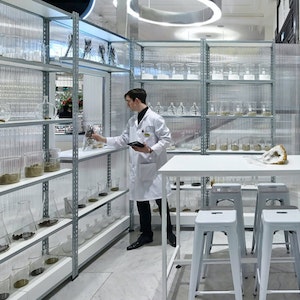 Underground Session: how the physical space is evolving

Find out what our panel of retail industry experts had to say... 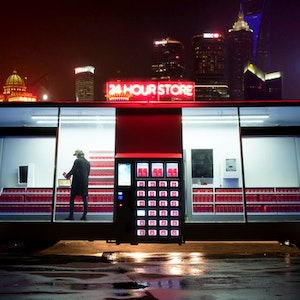 Between playable stores and mobile retail, we’ve taken a closer look to see where our shops of the future are at right now.