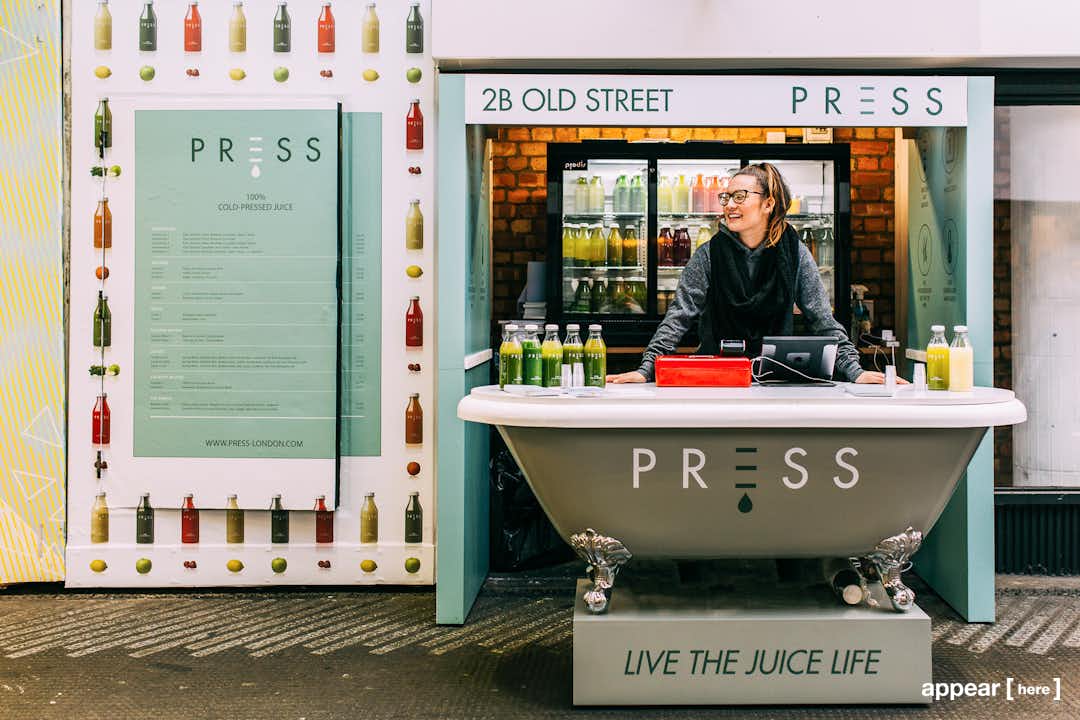 Old Street Station is the world’s first underground station dedicated to innovative retail and immersive brand experience. This tiny unit provides the perfect space to set up your kiosk or sampling bar, right in the centre of the station. Use the large cupboard area to the side, and the panel above the unit, to put your branding and logo in front of thousands of commuters a day. The space comes with electricity, a storage cupboard and a double-sided lightbox for branding.

You’re next door to another one of our our pop-up units, opposite the fast food cafe Nincomsoup, and near the independent bookshop, Camden Lock Books. We’ve got more pop-up shops a few doors down, view our other spaces available in Old Street station here.

Dollar Shave Club used the unit as a sampling booth during their station take-over in January 2018.


Freddie’s Flowers regularly pop up here with their infamous bike and fresh flowers.


Propercorn appeared here in January 2015 for a two-week pop up.

Bookings run strictly from Monday - Sunday with check in the day before your first day of tenancy.

You must have a black, cut out vinyl on your lightbox by 7.30am on the first day of your tenancy.

Check-in occurs from 4-5pm on the Sunday before your launch.

Check-out occurs from 11am-12pm on the last Sunday of your tenancy.

There is construction work happening in some parts of the station throughout 2019, but the underground and the retail units will remain operational throughout the planned works.

The station is a busy environment, which means the more exciting and innovative you are the more likely you are to make an impact. Consult with our Concierge team to make the most of appearing underground.

Old Street is a living, breathing underground station, with all its perks (amazing footfall, access to all the creative minds of silicon roundabout), and pitfalls (dust from the tracks and pests).

There is no water supply, but access to water is possible.