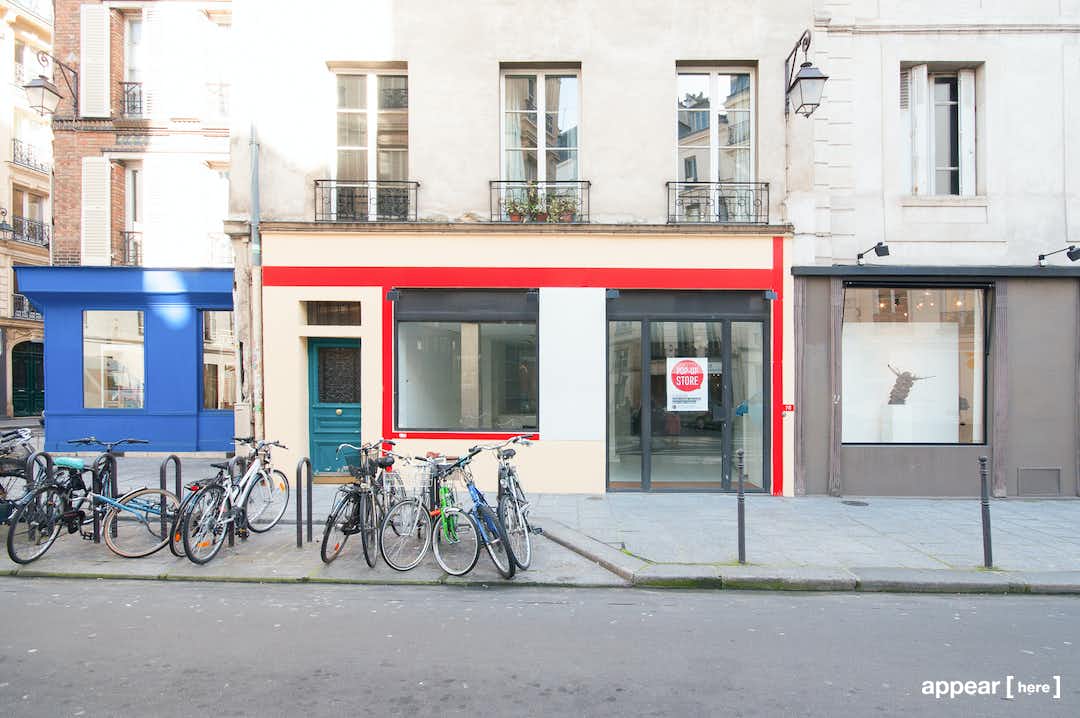 A few years ago, the upscale youth came to the Haut-Marais. Today, the area has totally invested and made it the crossroads of Parisian hype.

Behind a colourful storefront, this space is composed of three separate spaces each with a small chrome step, it has a simple and contemporary decoration: white walls, clear floor and projectors on the ceiling. Perfect for a brand that will play with the singularity of the place, this bright shop also offers a kitchenette and a small storage space.

In the heart of the Haut-Marais, less than five minutes from the Saint-Sébastien-Froissart and Filles du Calvaire ski resorts, the shop is easily accessible. Open on a crossing, this space is in a dense passage of streets that meets at the space. At present, the crowd remains demanding and surrounded by Helmut Lang and Zadig and Voltaire, it is necessary above all to bet here on the quality.

Maximum number of people allowed in the space is 30
The tenant is obliged to respect this obligation and will be the only one responsible for the consequences that could lead to its non-respect.
The activity would require administrative authorizations, the tenant will make his personal case of said authorizations and will conform during all the duration of this contract to an injunction which could be made to him by the administration without the responsibility of the lessor can not be sought in any capacity.
No overtime allowed
Price for the additional hours: 200 € HT/hour - any hour started will be charged.
The tenant acknowledges being informed that the respect of the term of the present contract is essential for the lessor and consequently accepts to have to pay a compensation of occupation of 2000 € HT per day of delay started in the restitution of these premises, besides all damages and interests. Without this clause may be authorized to remain in the Premises beyond the date and time specified in the contract. The Parties agree that each additional day commenced will result in the payment of the expected occupancy allowance.
Terms of payment: In the absence of a settlement within the contractual period, the lessor may alone invoke the nullity of this contract as of right, and will resume its entire freedom to contract with a third party from the day following the schedule stipulated in the contract. No keys can be handed over without said payments.
Respect of the neighbourhood and cleanliness: special attention will be paid to the noise before 8:00 AM in the morning, and after 20:30 PM in the evening. Any form of reception in the evening is prohibited. Inaugurations or launch cocktails may be held only with the agreement of the lessor. The tenant will return the premises in the state where he received them: cleaning included, garbage cans removed, furniture put back in place. Installation: the tenant will submit prior to the landlord any display project on the windows and exteriors of the Premises. The electrical installation and the lighting of the premises can not be modified without the prior agreement of the lessor. Emergency exits should not be obstructed by any layout. Any removal arrangement is excluded. Any installation will be done with the necessary precautions in order not to damage the grounds and the paintings. The use of staples, nails, glue, tape or any other material that could damage the Premises and/or the facade is strictly prohibited. Candles and tealights are not allowed on all premises.
Insurance and repairs: The tenant is responsible for any damage suffered and caused by his occupation of the premises. As such, it is expressly agreed between the parties that the tenant must directly take care of any necessary repairs to the Premises and reimburse the lessor for all repairs within eight days of the presentation of any invoice and/or quote, without being able to invoke any possible recourse to his insurance and/or any provider having intervened in the Premises as part of the realization of the event. The tenant will not be able either to invoke the treatment by his insurer of the file of disaster to evade his obligation of payment and to compensate within the eight-day period mentioned above.
The tenant is obliged to reimburse the lessor for all expenses and costs necessary for the restoration of the Premises and to make his personal case of any reimbursement of sums due that he could obtain later. In case of damage, the lessor reserves the right to claim the restoration of all or part of the premises in their initial state as defined in the contract. The landlord is also entitled to claim from the tenant any compensation requested by a future tenant or his agent because of the condition of the Premises left by the tenant, the latter must pay him within eight days of his request. In addition, the tenant is already committed to compensating the lessor, within a period of eight days following a request from him, for the following damages: 450 euros HT per section of wall degraded to repainting, 350 euros HT in case of loss of keys for the replacement and change of the necessary lock, 150 euros HT for the complementary household of the Premises if they have not been returned in their initial state.
Clause resolutory: in case of non-compliance by the tenant of any of the terms and conditions of this contract and its annexes, forty-eight hours (48h) after a simple command or summons to perform remained in full or in part without effect during this period and sent by registered letter with acknowledgment of receipt and / or by email, the contract of provision will be so good seems to the lessor terminated by right and without formalities, without it being necessary to order this termination, even in the case of payment or execution after the expiry of the above deadline. Once acquired the benefit of the resolutive clause, the tenant will be an occupant without right or title while remaining liable for all sums due to the lessor. The tenant would be liable for a daily occupation allowance fixed at 2000 € HT.

A white sign is on the front for you to add your promotion.

Rates shown are off event rates. These are often increased during major events in the capital, exhibitions and other exhibitions or according to the seasons, including Paris Fashion Week.