At Appear Here our mission is to create a world where anyone can find space to make an idea happen. We’re proud to say that the women in our community are the ones leading that charge, with 70% of the ideas on our platform created by women.

But what does space mean to them? Is it a way to enact change? To empower others? To express themselves?

In celebration of International Women’s Day, this month we’re exploring the power of space for women; how it can give people a voice, spread a message or start an idea. Across our streets, you'll find words from the female founders and entrepreneurs of our community speaking on how they use the power of space to create the change that they want to see. These are the women making their ideas happen, and bringing empty spaces to life – here are their words.

Janet spent seven years as a barrister, Janet decided to take a different route. Recognising the power of online communites she created Janet’s List; a space for people to spend with purpose, whilst also discovering independent, authentic brands by black women and women of colour in the UK.

Kate Miller - Miss Grass
"Gender doesn't define our success, the community within the space we create does."

Now at the forefront of a newly emerging but already male-dominated industry, Miss Grass acts as a disruptor by tapping into the huge (and largely ignored) female customer in the cannabis market. Together with co-founder Anna Duckworth, Kate is using space both on and offline to bring together this disregarded community to celebrate the emerging CBD culture through events and education.

Founded by friends Shannon and Ellena, The ReWrite Company was born out of a frustration with the representation of women in the arts. With the aim of creating a curated events series for women to have their voices heard; they’re using temporary space to create a safe environment for discussion and creativity for a residency that elevates women in the arts. Find their exhibition ‘And Then There Was Her’ at 103 Murray Grove.

Sophie Sellu, Grain & Knot
"A space can be a place to show those who said 'It Wouldn't Work"

After becoming disillusioned with her career in trend forecasting, Sophie Sellu chanced upon spoon carving and soon became obsessed. After honing her passion for the art of woodwork and building her brand, Grain & Knot, she entered our Space for Ideas competition. Sophie’s desire to share this passion for craft with others saw her picked as the winner from 3,000 entries. Her store come-workshop space became a safe-haven for Londoners to learn a new skill and find peace in tactile experience.

Emily is re-inventing the oldest type of retail: the grocery store. By bringing joy and discovery back into the routine of shopping, she’s using space to highlight the most exciting new brands and taking Pop-Up Grocer around the USA, starting with New York and L.A – next stop Austin, Texas. Through her store, she wants to use the real-life experience to switch up the norm of a digital age, to provoke interaction and ignite curiosity.

Noticing a lack of representation of BAME characters in books, then-Scholastic employee Aimée Felone joined forces with her colleague David Stepehns to form Knights Of, an independent and inclusive children’s publisher. The pair raised funds through a kickstarter campaign and brought their cause to life through a physical pop up. Off the back of the pop-up’s success they opened a permanent store, round table books, in brixton village

Louvreuse was founded in 2016, by Victoire de Villiers, a graduate from the Ecole du Louvre. Her high-end leather goods brand was inspired by her love of art history. Through championing local manufacturing, Victoire is creating a luxury brand that promotes sustainability, yet stays affordable for the modern woman. Her pop-up in Paris allowed her to bring Louvreuse’s growing community together.

Alex Zyndorf - The Same But Different
"How could a digital space hope to compete with a physical one?"

Our very own New York brand concierge, Alex Zyndorf, knows the power of physical retail better than most. She has helped launch hundreds of ideas, connecting brands to space across the US. Last year she decided to lead by example and, along with co-founder Sam Serafino, brought her sustainable fashion concept ‘The Same But Different’ offline into the real world to open a pop-up in NYC.

At the height of the refugee crisis, Josie saw a huge gap in the humanitarian aid effort and jumped in to fill it with a network of everyday people found through social media; this movement would end up becoming the iconic CHOOSE LOVE campaign. Using physical space to champion the Help Refugees agenda even further, Josie used her store to rethink the typical charity shop through positive messaging and a social media buzz. Whenever they open, every CHOOSE LOVE store creates queues around the block. 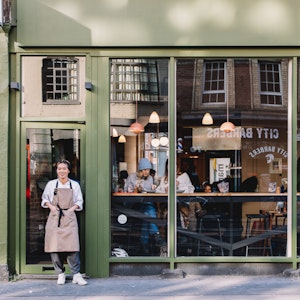 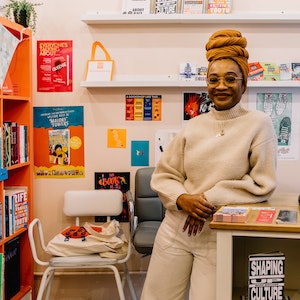