This week: Why we can’t get enough of throwback culture.

If throwback trend cycles have been giving you whiplash, hold on to your bucket hat. Gen Z, the cooler, more blasé little siblings of millennials, helped bring Y2K fashion back in a big way in 2021. You’ve seen the look everywhere: the oversized leather jackets, razor-thin sunglasses, and micro-bags that make you think of Paris Hilton’s teacup chihuahua.

The 90s revival love affair has had a good run. Now the youngs have their sights set on a more, shall we say, familiar era. So familiar in fact, that some of us have barely forgotten it from our own days of yore: the early-to-mid 2000s.

• This new wave of nostalgia has been called twee core, indie sleaze, and Tumblr style — but the gist is this: styles from the 2010s are making the rounds again. Think: indie Britpop influences, flash photography, and outfits only Zooey Deschanel could really pull off. “The styles are gaining significant traction thanks to content creators and fashionistas reviving their adolescent aesthetics. Now the Tumblr [...] style is being revisited by its millennial originators, but also Gen Z, which has discovered and altered the trend” reported Vogue.

• In case you need a walk down memory lane, the basic fabric of twee fashion movement was basically anything you could buy on Etsy. During the heyday of the 2000s indie zeitgeist, DIY designs reigned supreme. The trend’s comeback could provide an opening for modern indie brands to find new audiences. After selling vintage clothes from their van while on the road, founders of the clothing brand Lucy & Yak decided to set up shop with yours truly and found their niche in - wait for it - the dungaree business. OshKosh beware.

• At New York Fashion Week, Saint Sintra, a buzzy independent brand favoured by Euphoria cast members and other Gen-Z darlings, was one of the first small-scale designers to make a splash. “A Gen Z Brand Looks Beyond Y2K” reads one Business of Fashion headline, noting the brand’s move away from its signature sheer dresses and bedazzled accessories inspired by the late 90s “McBling era” for more evolved silhouettes and materials. Shifts like this tend to ripple across the high streets and algorithms alike, so consider yourself warned: the times, they are a’changin’.

If the idea of tweens ironically sporting the same Arctic Monkeys tee you wore in your MySpace profile pic circa 2006 is enough to make you feel geriatric, well... same. But on the bright side, maybe it’s a good time to pick up that crocheting habit again.

Here’s the thing about nostalgia. It’s a tasty sweet with a sour centre. The word comes from the Greek roots “nostos” and “algia” which translates roughly to “the pain of returning home.” Anyone who has found an old mixtape CD in the dusty console of their car knows that tingly bittersweet feeling that nostalgia can inspire.

One of the earliest recorded cases of the feeling was in the 17th century when a young doctor named Johannes Hoffer noticed a group of Swiss sailors were suffering strange symptoms from being intensely homesick at sea. According to The Atlantic, the sailors longed for the familiarity of their normal lives back home. The doctor diagnosed them with a disease he called: nostalgia.

• Nostalgia’s surge in the pandemic stemmed from a similar homesickness for a past time. Lockdowns made our typical ways of connecting impossible, so we had to turn inward. A study published in Social Psychological and Personality Science found that nostalgia was a helpful way of coping with loneliness. We had virtual interactions through Zoom rooms and social media, but the quality of our connections was still kind of meh. Researchers observed people developing another strategy: “drawing on one’s reservoir of nostalgic memories.”

• Indulging in the good old days had a big impact on our spending habits. "Nostalgia is a refuge, as people turn to the feelings of comfort, security, and love they enjoyed in their past…” explains Business Insider on the trend. “It's created a throwback economy in which nostalgia fashion is driving much of today's consumer culture — how brands are marketing to the masses; what clothes retailers are deciding to buy, sell, and highlight in their storefronts; and what consumers spend their money on.” Recently we’ve fallen in love black-and-white portraits of Music Poster, a brand that sells prints of hard-to-find iconic music photography. You can find their next shop with Appear Here at the absolute epicenter of nostalgic romance: Brighton Beach. Be still, my teenage heart.

• Big brands have taken note. “It’s not the literal past that rules us” wrote essayist George Steiner in 1971, “it’s images of the past.” That’s why the spendiest advertisements of the year seem to be harkening to happier times. “Once, ad campaigns could unite an audience not just by returning to the past but by promising a glittering future. But now the future is confusing — see all the ads for cryptocurrency — or scary,” writes critic James Poniewozik for The New York Times.

A vibe shift is coming, warns The Cut. Will it take the shape of a regrettable ‘scene’ side fringe? (Please, god, no.) Or is the shift already upon us in the form of a Substack blogging renaissance?

Whatever the case, pop culture is becoming more fragmented than an emo kid’s broken heart – and trendspotting more dizzying than ever. Are skinny jeans dead or are they coming back again? Is your dad wearing dad jeans or is he just wearing jeans?

On the topic of pandemic nostalgia and the endless decision of opting into new trends, founder of cultural insights consultancy 8Ball, Sean Monahan, asserts: “We all have permission to stay stuck at whatever makes us feel comfortable, and if that’s in 2016 or 2012 or 2010, that’s fine.”

For what it’s worth, staying stuck in 2019 is totally fine too. And if anyone asks, just tell them: it’s ironic. 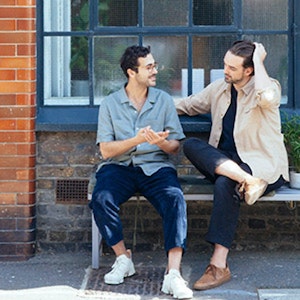 The Five at Five: Paul + Niko, Earl of East 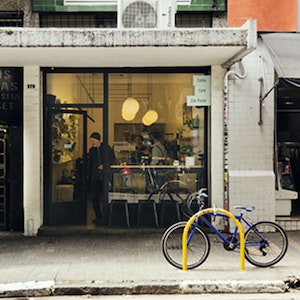 São Paulo in Brazil is one of the largest cities in the world. This year, our attention turns to Vila Madalena.