In a world overwhelmed with information and choice, it’s never been more challenging– or exciting– for brands to find their voice. From our screens to the streets, our everyday lives are driven by content. As big and small brands alike look to become master storytellers, the role of the editor has become more important than ever for retailer.

This week, Appear Here invited a panel of experts to discuss how modern brands are leveraging storytelling. Gathering for an intimate Underground Session in one of our favourite concept stores, Clerkenwell London, we were joined in conversation by panelists Jeremy Langmead, Brand and Content Director at Mr. Porter; Pandora Sykes, Fashion Features Editor at Sunday Times Style; and Georgina Harding, Co-Founder of Semaine. Here are some of the highlights from the conversation.

If anyone can speak with conviction and eloquence about how commerce and content have evolved, it is certainly Jeremy Langmead. “I hate the term ‘branded content’, as it sounds so derogatory. People don’t realise that branded content has been around forever,” says Jeremy, who accidentally stumbled upon his editorial career after graduating from Central Saint Martins as a fashion student in the 90’s. He’s since gone on to launch the Sunday Times iconic fashion supplement and hold leading editorial roles at Christie's, Esquire and Mr. Porter.

“Content has become one of those loaded words that you hear time and time again, mainly because we’re at a loss of how to describe things in the digital world,” said Pandora Sykes who, as a young journalist, stumbled into the fashion world as a blogger. She’s now Fashion Features editor for the Sunday Times, host to her own podcast series, The PanDolly.

“On social media, the best editors are those who have been journalists before, because they understand the power of a caption. We’re seeing more and more journalists joining brands, firstly, because brands have money– but mainly because it’s such an exciting time to change the way brands are perceived and how stories are told,” said Pandora.

“We live in a world with constant FOMO. Most brands do things because they see others are doing it. But the power really lies in recreating that story in a new way”, said Georgina Harding, who worked as brand strategist for Mario Testino before co-founding Semaine, a website transforming the way people discover content and shop. Since launching last year, the website has risen to the top of the radar by giving addictive insight into the worlds of different tastemakers and the objects that fill their lives.

Context is the key to satisfying your audience

Great branded content, our panelists agreed, starts a conversation that lets people understand your point of view and paints a context for your audience.

“Yes, we’re selling the tastemaker and the brand, but the reason it works is that we’re selling the context. We understand that these tastemakers have an authority,” Georgina added. “When we featured Jemima Kirke, our website nearly crashed– because she is so amazing, and because people want to understand who she is and what she likes, down to the type of cigarettes she smokes.”

While social media has certainly played its part in opening up a conversation, Semaine takes this to a new level by turning the tastemaker into an editor in their own right. Everything featured is for sale. “We’ve also realised that a lot of the smaller brands are selling on our site better than big brands because they’re what our audience wants to discover.” says Georgina.

“Whether you’re a physical or online store, the most important thing is to put things in context. Show your audience why this thing should make it into their lives and create a dialogue. When brands go wrong it’s because they talk at people, not with people,” Jeremy added.

“Small brands are using platforms like Instagram as their own shop window,” says Pandora, explaining how the brands who excel at this use social media feeds to create their identities in a way that it resonates to their customer. ”When I see a brand that is savvy enough to understand what people are excited about, that’s what excites me.”

“With digital, you’re enabled to be so much more nimble than in the old days, where you had to wait three months to see something appear in print. That’s exciting because you have the ability to satisfy your reader,” Jeremy adds. “What we all do is we create worlds. It’s a huge honour and privilege to be able to do that. I think you always have to listen to what people want, and it’s the arrogance of not doing that when things go wrong”.

Take it offline: Extend your dialogue in store

The power of modern storytelling lies in listening and understanding what your audience wants, which doesn’t necessarily have to happen online. As the line between offline and online continues to blur, the digital world has a trickle-down effect on the way we shop in store, too.

“On the other hand, the usage of things like virtual reality in brick and mortar stores to create new ways for people to engage with their product is something we’re going to be seeing a lot more of,” says Pandora. “However, then there are beautifully curated stores such as Clerkenwell London or The Line in New York where you walk in not necessarily to buy, but walk out out with something super expensive. That’s when you know you’ve done it right”.

What’s another prime example, according to Georgina? Ikea. Now there’s a brand that knows how to offer its customers context, and influence them to walk out with a whole lot more things than they thought they needed to begin with. 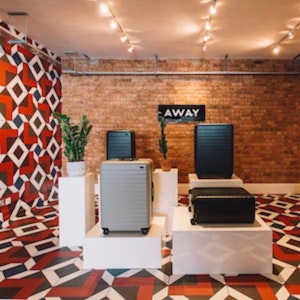 Behind the store: Away

We chat to Jen Rubio, founder of Away about their first London store and international expansion 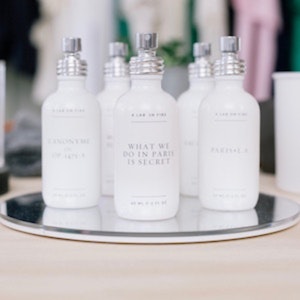 How to scent your store